Whatever Happened to the Man of Tomorrow? (Table of Contents) 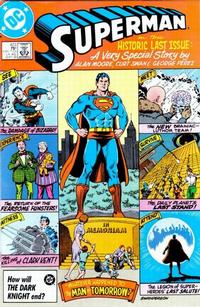 Superman in "Superman" (Table of Contents: 1)

Job Number
S-4826
Synopsis
Recapping the Superman series from it's early days to this, the final issue.
Reprints

Inside front and back covers.

Whatever Happened to the Man of Tomorrow? (Table of Contents: 2)