The Question Is Back--And the Answer Is Murder! (Table of Contents) 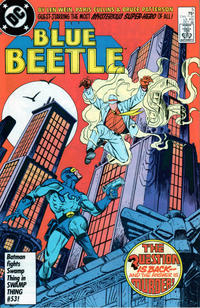 Featuring the official DC debut of The Question, the hero who shared the Charlton Blue Beetle series. (He had a 1 panel cameo in Crisis on Infinite Earths #6.) Here, the Question is a somewhat standard masked character, as opposed to the off-beat character in the Question's own DC series.