On-sale date from DC Releases #29.
This issue has variants:

Nightmare in Steel! (Table of Contents) 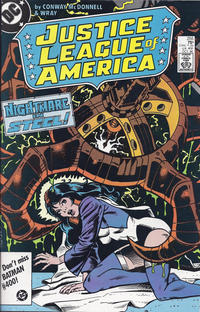 On his blog on 2009-09-18, J. M. DeMatteis has admitted that he used "Michael Ellis" as his pen name for this script. There was no particular reason for it other than 'I wasn't sure if I wanted to keep writing super hero comics and so I was reluctant to use my name', but word from above said '"No pseudonyms" and, with the next issue, I was back to being me.'