On-sale date from DC Releases #30.
This issue has variants: 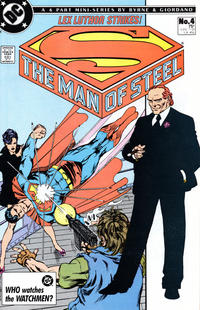 Genre
superhero
Characters
Superman [Clark Kent; Kal-El]; Lois Lane; Mayor Frank Berkowitz; Yvette; Lex Luthor
Synopsis
Luthor allows a group of terrorists to attack his luxury liner so he can meet Superman and put him on his payroll. But Superman refuses to be bought and Luthor is jailed for reckless endangerment. In response Luthor vows revenge on the Man of Steel.
Reprints