According to Jim Vadeboncoeur, Jr., based on the ads, this appears to be material prepared in 1945, but released around 1950, along with the other issues numbered volume 2.

Entire book is almost certainly lettered by the same individual. Suggested by Jim Ludwig July 2008 and Eric Schumacher agrees suggesting "Two possible names are Ellen Cole (wife of L.B. Cole) and M. Tweed. Ellen Cole also did lettering for Holyoke in 44-45, and it seems like I've seen this lettering before (but that could also be simply because I've looked at the book so much over the years), so I kind of lean toward her." 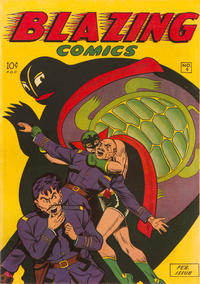 Mission to Chunking (Table of Contents: 1)

A different comment:
A tricky one here, as this is not Albright, but Bill Allison.
Several facts point to that.
The faces in close up in all these Tommy Paige stories are the same shape, narrower chin and jaw than Albright's more rounded in her signed stories of The Cadet in 4Most Comics.
The overlip in the Allison close ups are always formed, either thin black waves or an open waved outline, while Albright just made an even line (males), never waves or outline.
Allison had several small ink lines on the cheekbones, but Albright usually made one arch or none at all.
The ears of Allison usually had several lines inside, often non-connected, while Albright most often used two Cs or a continuous S-figure.
Allison had a funny way of drawing running people with outstretched legs really stepping on it, with Albright a bit more realistic.
Allison had eyes in close up with pupils, very thin wavy eyebrows pointed at each end, while Albright had eyebrows a little thicker by the nose.
Albright and Allison can be very difficult to separate. The artwork on the first four Tommy Paige stories is by the same artist, and the first is credited to Allison by Jim Vadeboncoeur, Jr. So if JVJ is right and the credited stories elsewhere are right, then all four are by Allison, not Albright.

Compare these faces in close up with credited Allison stories like Jesse James in Cowboy Western #38 and Chameleon in Target Comics v5#5, and with Albright stories in 4Most Comics.

Art ID suggested by Gary Watson, June 2008.
Jim Vadeboncoeur, Jr. has Gil Kane and/or Leonard Starr as possible artists here, as the artwork is identical to the five first in this feature. Some faces like Starr, and Kane with something like his signed Eli Katz stories, but hard to spot any Green Lantern-Kane.

Cargo of Death (Table of Contents: 6)

July 2008 Eric Schumacher confirms pencils 100% sure and gives credit to Chu Hing for inks 100% sure, Gary believed it to be Battefield inks.

Specified credits listed by Alex Jay in his article in Alter Ego (TwoMorrows, 1999 series) #167 (January 2021), specify that Hing only did inks on this feature, no pencils.

The Corpse That Came Back (Table of Contents: 8)