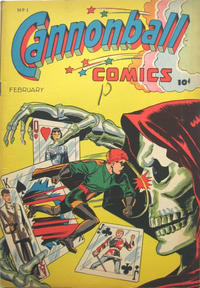 Genre
humor
Characters
Hobo-Ken
Synopsis
Hobo-Ken steals a pie, and shares it with the cop who chases him.
Keywords
hobo; pie

Art credit suggested by Who's Who of American Comic Books website.

The Strange Case of the Black Dragon Gods! (Table of Contents: 2)

Genre
satire-parody; superhero
Characters
Mussel-Man
Synopsis
Mussel-Man is late getting to a crime because he has to iron his uniform. He lands in a puddle and his uniform shrinks.

Superman parody, includes "Up, up and away!" dialogue.

Art credits suggested by Who's Who of American Comic Books website.

Genre
teen
Characters
Ted Hardy; Cal Vetter; Zelda; Lizzie Jones
Synopsis
Ted Hardy transfers from a rural school to a big city school where he tries to fit in. He gets his chance in the final football game of the season.
Keywords
football; high school

Genre
humor
Characters
Hank
Synopsis
Hank outfights a dozen Japanese soldiers on an island in the Pacific but breaks his leg while jitterbugging when he gets home.
Keywords
jitterbug dance; Pacific; Statue of Liberty; World War II

The Crash Kid Scores a Scoop (Table of Contents: 6)

Text story with two illustrations. Same artist as the other Crash Kid story in the issue.

The Strange Deaths of the Painted Grin (Table of Contents: 7)

Art credits suggested by Who's Who of American Comic Books website.

Genre
crime
Characters
Andy Prescott; Mysto the Magician; Spud Mahoney
Synopsis
A district attorney uses a card trick to distract a thug who wants a statement that the D.A. has in his possession that proves the thug is a murderer.
Keywords
color-blind; playing cards

Text story with one illustration.

Genre
adventure
Characters
Brand [Thunderbrand] (first appearance); Barbarossa; Giacomo; Teng-ha; Hassan
Synopsis
Young Brand wins a sword fight and earns the right to find out how he came to be part of a pirate ship's crew. A lost golden scepter holds the secret of his identity. A raid against Algiers goes badly, and Brand has to rescue Barbarossa, the captain.
Keywords
1500; Algiers; dungeon; pirates; ships; swords; torture

Art credit suggested by Who's Who in American Comics website.

Genre
humor
Characters
Gunsite Gus
Synopsis
Gunsite Gus goes hunting for rabbits, but the one he finds tricks him into having his shotgun smashed by rocks.
Keywords
rabbit hunt; shotgun

The characters act like Elmer Fudd and Bugs Bunny in the Warner Bros. cartoons.

Birthstone Ring Given Away (Table of Contents: 12) (Expand) /