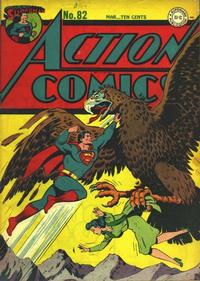 The Water Sprite! (Table of Contents: 3)

Genre
superhero
Characters
Superman [Clark Kent]; Lois Lane; Perry White; Nellie Thornley; the Water Sprite [Kenneth Darby]
Synopsis
Superman investigates the allegations of a young woman about the existence of a "water sprite", all a hoax to keep the authorities from discovering cheap materials that had been used in building a dam.
Reprints

Mind Over Matter! (Table of Contents: 5)

Art credits by Jerry Bails. Alvin Schwartz script credit removed by Craig Delich. The Who's Who states that Schwartz wrote this strip from 1946-48.

Around the Clock with Armor (Table of Contents: 7)

Genre
jungle
Characters
Congo Bill; Mike
Synopsis
While out west, Bill discovers an illegal diamond mine on the US/Mexico border. He captures the gang operating the mine and turns them over to Mexican authorities.
Keywords
caves; diamonds; Mexico; wells

First Line of Dialogue or Text
That sure is a remarkable machine!
Genre
advocacy
Keywords
War Bonds

Magnet for Mobsters! (Table of Contents: 11)

Facts and Fables! (Table of Contents: 13)