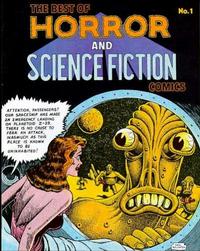 Inside front cover. Discussion of the stories in the issue with reprint sources.

The Brain-Bats of Venus (Table of Contents: 2)

The version reprinted is the Comics Code-approved one, with changes to panels five and six on page four and panel six on page five.

Gave Life to Save Lives (Table of Contents: 5)

Library of Horror (Table of Contents: 6)

Genre
satire-parody
Synopsis
Farm girl Chick Little is hit on the head by an acorn. She thinks the sky is falling. She runs off and has encounters with hipsters, United Nations, psychiatrists, quiz shows, etc. At the end, the planet Mars looms over her farm; she and her father are grabbed by Martians.
Reprints

Story cited in Seduction Of The Innocent.

We Can Stop the Enemies of Youth (Table of Contents: 10)

"Prepared through the cooperation of NYC Youth Board & the Assoc. of Comics Mag. Pubs." On back cover. PSA originally appeared in various Lev Gleason and Eastern Color comics in the early 1950's.