The on-sale date is from the publication date recorded in the Catalog of Copyright Entries, Part 2, Periodicals, 1945, New Series, Vol. 40, No. 2. 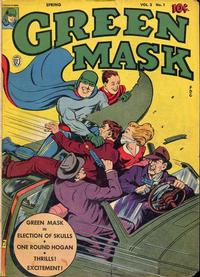 The Mystery of the Cat's Meow! (Table of Contents: 1)

Genre
superhero
Characters
Johnny Green; Beverly Crane; Sonny Kendrick; Mr. Whiskers
Synopsis
Johnny greets Beverly and Sonny, selected to participate in a Green Mask adventure. Mr. Whiskers and his gang, fleeing from the cops, nearly run over the teenagers, but Johnny changes into the Green Mask and stops their car. The crooks are arrested but the diamond they stole is nowhere to be found. Beverly adopts Mr. Whiskers' cat over the villain's objections. Mr. Whiskers escapes, then abducts Beverly and Sonny and recovers his cat. The Green Mask unmasks Whiskers, who has disguised his cat as a dog. The crook is captured, the kids freed, and the diamond recovered from the cat's collar.

Jack Fiske (sometimes Fisk) was a house byline on this feature.

Beverly Crane of 2529 Swayze Street, Flint, Michigan and Sonny Kendrick of 7056 Easten [sic = Eastern] Ave, Washington DC were actual readers who "were selected to accompany Green Mask on this tale." In the story, Johnny chooses their letters from Green Mask fan mail.

The Hawk (Table of Contents: 2)

The Election Of Skulls (Table of Contents: 3)

Genre
superhero
Characters
Johnny Green; Suzie; Green Mask; Numbo
Synopsis
Johnny and Suzie visit an African village exhibit at the museum, and Johnny is chosen by the natives to be their Chief Skull. His mouth is accidentally burned and he can't summon the Green Mask by shouting "E-e-e-ow." They're taken to Africa where Numbo tries to kill Johnny during the "purification ceremony" so Numbo will be the new chief. Mud, which several captive scientists say has "healing powers," makes it possible for Johnny to shout aloud and become the Green Mask. The Green Mask defeats Numbo and teaches the villagers how to elect their own leaders from now on.

Jack Fiske is the house byline for this feature.

In this story, Johnny knows he can summon the Green Mask voluntarily by saying "E-e-e-ow," whereas in previous issues he was unaware that this angry utterance changed him into the superhero. However, when the Green Mask reverts to his "Johnny" form at the end of the story, Johnny still can't recall what happened.

First Line of Dialogue or Text
All prize fighters at some time in their ring careers get into a slump...
Genre
sports
Characters
Tim "One Round" Hogan; Blimp; Spigot Barnett; Lillyan; Brazilian Panther
Synopsis
Boxer Hogan disappears to rethink his career choice. Wandering through the Kentucky mountains, he meets attractive hillbilly Lillyan, whose father just died and who fears she'll lose her home to foreclosure. Hogan agrees to fight the Brazilian Panther. He wins and will use the money to give Lillyan a new start in life.
Keywords
boxing

Jo Logan was a house byline for this feature.

Bud Davis may have been a house byline.

Simmons is first identified in a caption as "the host" but the party is held by the Van Brunts, so he should be Mr. Van Brunt. In the next panel he's arrested and identified as Simmons.