New Batman logo designed by Todd Klein (per his website).

On-sale date from DC Releases #33.
This issue has variants:

Year One Part 1 (Table of Contents) 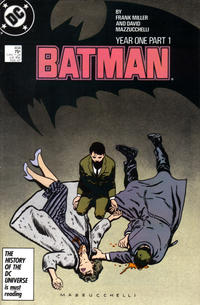 Batman: Year One Chapter One: Who I Am How I Came to Be (Table of Contents: 2)

Job Number
G-2835
First Line of Dialogue or Text
He will become the greatest crimefighter the world's ever known... It won't be easy.
Genre
superhero
Characters
Bruce Wayne [Batman] (does not appear in costume); Alfred Pennyworth; Lt. James Gordon; Lieutenant Flass; Commissioner Gill Loeb; Selina Kyle [Catwoman] (does not appear in costume, 1st appearance in Modern Age continuity); Holly; Thomas Wayne (death, flashback); Martha Wayne (death, flashback)
Synopsis
Bruce and Gordon both arrive in Gotham on missions that are sure to put their paths on a collision course. Gordon joins the GCPD which is rife with corruption and he is taught a savage lesson when he tries to buck this new system. Bruce tries out his years of training in a simple street brawl that does not go as planned. Wounded and searching for inspiration, Bruce finds it as a bat flies through the window.
Reprints