Brer Rabbit in This Issue! (Table of Contents) 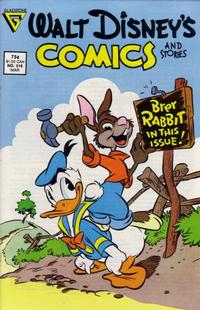 [All Is Not Gold That Glitters; Going to Sea] (Table of Contents: 1)

Story is untitled in this issue. The “Going to Sea” title appears to have originated later, in Donald Duck 307 (Gladstone, March 1998). Provenance of the “All Is Not Gold That Glitters” title is unknown.

In “A Gander at Gladstone,” in Walt Disney’s Comics and Stories 517 (April 1987), Gladstone retracted its credit in this issue to Dick Moores for full art, instead crediting Moores with inks only, while adding credits to Bill Walsh for script, and Paul Murry for pencils. Gladstone thanked Alberto Becattini “and other astute readers” for the information.

Story is untitled in this issue. The recorded title may have originated later, in The Carl Barks Library of Gyro Gearloose Comics and Fillers in Color #1 (Gladstone, January 1993).

The Phantom Fires (Table of Contents: 4)