The Riddle of Toys (Table of Contents) 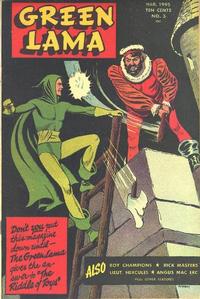 The Riddle of Toys! (Table of Contents: 2)

Page 9 is drawn by Harry Anderson, as can be seen by the faces both of Green Lama and the villains. Anderson's faces have a special mouth with two lines that don't meet at the center, and more open eyes than Raboy, and also some lines on the cheek, which never appear in faces by Raboy, who is very "economic" with lines. Compare with the signed Anderson story in "Mr. Scarlet and Pinky", Wow Comics #34. Also page 12 has Anderson faces in panel 1 and 3, so this page is most probably by Anderson too. Anderson is credited on Green Lama by Jerry Bails' Who's Who, but he is not found credited in any of the Green Lama features in GCD. Anderson also has several pages in Green Lama #5.

Music for Geraldine! (Table of Contents: 3)

Cobwebs of Death (Table of Contents: 4)

Genre
crime
Characters
Inspector McGabe; Dr. Sam Hoyle; Mr. Sanders (villain)
Synopsis
When Dr. Hoyle wants to visit the haunted Old Mill, because of the fact Jim Sanders burned to death in the cellar there years before, he discovers the culprit was his partner, with whom they had created an invention to improve a radar defense system that could spot German rocket bombs. Now he wants the money from that invention.
Reprints

Holiday in Hollywood! (Table of Contents: 5)

Genre
humor
Characters
Angus Mac Erc [aka McErc]; Sir Alexander Stringer; Algernon; Whetstone Sharp
Synopsis
Angus heads for Hollywood to see how a real horror film is produced, but discovers he is not the only one who wants to know: a real vampire does, too!
Reprints

Rhoda Lewis is listed as letterer for the book, BUT the lettering for this story looks entirely different from the rest of the stories she lettered in the book, so removed her as possible letterer.

Genre
sports; humor
Characters
Mike McTigg; Pop
Synopsis
Pop is talked into getting Mike to train the fellas down at the club.
Reprints

The Case of the Concrete Impossibility! (Table of Contents: 8)