The Maze of Murder! (Table of Contents) 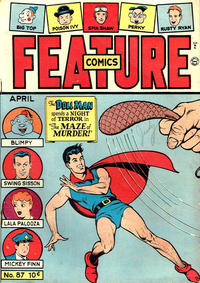 The Merry Maze of Murder (Table of Contents: 1)

Tilting figures with long upper body and awkward way of standing and walking, some wild eyes, and also broad shoulders and narrow head on stretched neck are all pointing to Zolnerowich. He is credited on both pencils and ink on this feature by Jerry Bails' Who's Who, but inking vary, so uncertain.

First Line of Dialogue or Text
It sounds silly, Lala...
Genre
humor
Characters
Vincent Palooza; Lala Palooza; Chauncey Chuckle
Synopsis
Lala says her fiance Chauncey told her he has "an extra fine cellar" for Vincent. Vincent thinks it's a wine cellar, but it's just a regular cellar where Vincent can sleep on a cot and tend the furnace.

First Line of Dialogue or Text
Remember, we're leaving Southern Beach today...
Genre
humor
Characters
Lala Palooza; Vincent Palooza
Synopsis
Vincent admires the bathing beauties on the beach and chooses one at random to say "Hello" to--he's arrested as a "beach wolf," having picked the "only lady cop on duty."

The Land of Poker (Table of Contents: 7)

The Joker is not the Batman villain!

A Battle over Silk Stockings? (Table of Contents: 11)

Heads in 3/4 backview with streched neck and the jawbone going back behind the ear, even in side view, is peculiar. This can be found in his credited "Mike Gibbs Guerilla" story in Adventure Comics #88. Most probably him on this story.

First Line of Dialogue or Text
Butch, the daughter of an old pal of mine wants a job in our living statue group...
Genre
humor
Characters
Butch; Boss Jeff Bangs
Synopsis
Assigned to greet a new circus employee, Butch imagines her to be a slim beauty. Instead, the young woman is brawny and better suited to driving tent stakes than posing in scanty attire.

[The Japanese Hypnotist] (Table of Contents: 14)