On sale date from the publication date reported to the U.S. Copyright Office found in the Catalog of Copyright Entries, Part 2, Periodicals, 1945, New Series, Volume 40, Number 2. Class B periodical. Copyright registration number B 666264. 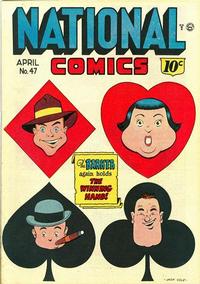 [Swami Joe and the Counterfeiters] (Table of Contents: 6)

First Line of Dialogue or Text
It's foolish to pay twenty bucks to have my furniture moved when I can do it myself!
Genre
humor
Characters
Windy Breeze

[The Vengeance of Boss Bumble] (Table of Contents: 8)

Sworn to and subscribed to Louis J. Rubiansky on September 28, 1944.

[Big Joe Ryan and the Silver Bracelet] (Table of Contents: 11)

First Line of Dialogue or Text
Here's the story on Big Joe Ryan!
Genre
detective-mystery
Characters
Chic Carter; Chic's newspaper city editor; Big Joe Ryan (villain, introduction); Louella (villain, introduction); Blackie (villain, Ryan's chauffeur, introduction)
Synopsis
Chic writes a story on Big Joe Ryan and immediately is confronted by a lady wanting him to go to a certain jewelry store and pick up a silver bracelet, and upon delivery to her, he is to get a cool $500! But Ryan meets up with Chic and somehow the bracelet disappears before Carter can deliver it... and Carter is arrested for robbery. But Chic discovers that he has been played for a sucker with a phony, frozen mercury bracelet, and thus seeks out Ryan.
Reprints