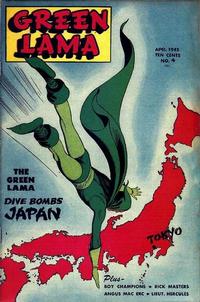 Characters
The Green Lama [Jethro Dumont]
Synopsis
Table of contents page promoting, with illustration, the features and story titles (with brief synopses) in this issue.
Reprints

Genre
superhero
Characters
The Green Lama [Jethro Dumont]; Tsarong; the Japanese (villains, some die); Emperor Hirohito (villain, cameo)
Synopsis
The Lama decides to intervene when he learns that the Japanese have learned how to make Hitler's robot bombs, and they are using them against U.S. forces in the Pacific.
Reprints

Genre
adventure
Characters
The Boy Champions [Tuffy; Mickey; Wellington Smith]; Mr. Chen; "Betcha" Benny (villain); Mr. Krat (villain)
Synopsis
The Champions are hired to settle a bet between two men re taking a bull into a china shop to see if it would do any damage, unknown to them that it's a ploy to steal valuable jade.
Reprints

Genre
detective-mystery
Characters
Old Peters; Callaghan; three un-named Nazis (villains)
Synopsis
Old Peters smells a rat when late one night three men, maintaining they are crew members aboard the "Arriba", ask for directions as to where their ship is docked.
Reprints
Keywords
Arriba

The Right Bottle! (Table of Contents: 5)

Genre
adventure
Characters
Angus Mac Erc; John Hamitmore
Synopsis
An aging actor tells Mac Erc that he wished could be forever young and live forever......Angus decides to grant the request to him and two others, but with a bit of a twist.
Reprints

Rhoda Lewis is listed as the book's letterer but the lettering in this story is totally different from the other stories she did in the issue, so revised lettering credit from her to ?.

First Line of Dialogue or Text
I can see it, Mike - you're over-trained...
Genre
humor; sports
Characters
Mike; Pop
Synopsis
Pop takes Mike hunting because he had been over-training, but ends up battling a bear!
Reprints

Genre
adventure; aviation
Characters
Rick Masters; Twin Eagles [aka Mike]; Dan (villain); Dan's gang members (villains)
Synopsis
Masters becomes involved with a gambler who has just lost his gambling ship, due to a fire, but invites others to play a high stakes card game, intending to kidnap them and hold them for ransom.
Reprints

In Comic Land! (Table of Contents: 9)