On sale date from the publication date and volume number found at the Catalog of Copyright Entries, Part 2, Periodicals, New Series, Volume 34, 1939, Number 2. Class B periodical. Copyright number B 413280. 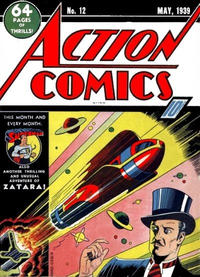 First Line of Dialogue or Text
The Gorrilla [sic] - For some unknown reason the gorilla becomes furious...
Genre
non-fiction

The last panel on page 13 features an ad illustrated by Bob Kane for the new feature beginning that month in Detective Comics: the Batman! Notes and synopsis added by Craig Delich.

First Line of Dialogue or Text
--And if you don't tell the truth...
Genre
humor

No feature logo or banner.

First Line of Dialogue or Text
After the hunt and capture of the baby cheetah...
Genre
historical
Characters
Marco Polo

First Line of Dialogue or Text
About 80,000 horses are victims of sleeping sickness...
Genre
non-fiction

[Portrait of an Insect] (Table of Contents: 12)

The Land of the Fourth Dimension (Table of Contents: 14)

Letters possibly by Fred Guardineer. Compare to signature on cover.