Colossus of the Blood-Moon (Table of Contents) 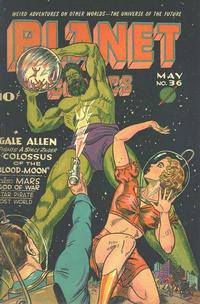 The art here is reminiscent of both Renee and Ingels but is not clearly by either of them.

First Line of Dialogue or Text
And why does Mars laugh? Did not the...
Genre
science fiction
Characters
Mysta of the Moon; Mysta's robot (intro); Mars, God of War (cameo); Villains: Superbrain (intro; death); Bela (intro)
Synopsis
Mysta fights the evil Superbrain, who uses his zombie army and a dangerous fungus to disrupt interplanetary travel and communication so that he can rule the universe.
Reprints
Keywords
fungus; zombies

Despite this being a continuation/revamping of the Mars strip, the cover blurb still reads "Mars God of War."

Colossus of the Blood-Moon (Table of Contents: 3)

Doorway To Destruction (Table of Contents: 4)

First Line of Dialogue or Text
What's that--? Red light flashing!
Genre
science fiction
Characters
Star Pirate; Blackbeard (intro; appears in most stories from now on); Villains: A lady pirate and her band (intro for all)