The on-sale date reflects the publication date as reported in the U. S. Copyright Office filing. It matches the shipping date listed in Direct Currents #2 (February 1988).

Comic has been through 14 printings. Most can be identified by the color of the lettering on the title and cufflink. 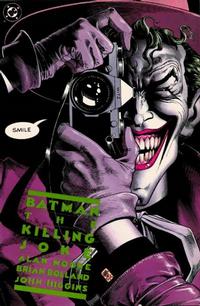 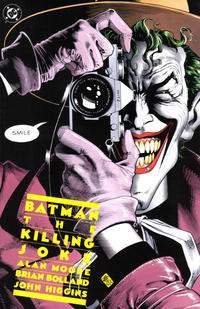 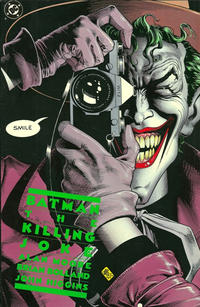 First Line of Dialogue or Text
There were these two guys in a lunatic asylum...
Genre
superhero
Characters
Batman; Commissioner Gordon; Barbara Gordon [Batgirl]; Harvey Bullock; Alfred Pennyworth; Joker (also as the Red Hood in flashback); Two-Face (cameo); Penguin (cameo); Jeannie; Mrs. Burkiss
Synopsis
Batman visits the Joker in Arkham Asylum only to discover he has been replaced by a double. As Batman attempts to track the villain down, the Joker shows up at the house of Commissioner Gordon where he promptly shoots Barbara and captures her father. The Joker takes Jim to a modified carnival where he tries to drive him mad (partially by showing him pictures of his naked and bleeding daughter). Batman arrives and starts beating on the Joker who attempts to reason with him in his own insane fashion. As things wrap up and the police arrive, the Joker finally tells Batman a joke that he gets.
Reprints

which is reprintedwhich are reprinted

The endpapers (which include credits and publishing information) are close ups of the raindrops from the first and last panel of the story. Story tells a comprehensive origin of the Joker based on the story "The Man Behind the Red Hood" from Detective Comics (DC, 1937 series) #168. This story is still considered controversial over two decades after its publication, mostly due to the crippling of Barbara Gordon (which was not revealed to be permanent until subsequent issues of Suicide Squad where she first appeared as the wheelchair bound Oracle), but there is a clear indication that creators Moore and Bolland originally intended this to be a non-continuity "final" Batman vs. Joker story when Bolland strongly insinuates in the afterward printed in Batman: The Killing Joke Special Edition (DC, 2008 series) #[nn] that Batman kills the Joker "off camera" in the last three panels of the story.

Back cover shows a playing card featuring Joker on the top and Batman on the bottom.