Layouts are by Rhoda Lewis.

The Four Freedoms (Table of Contents) 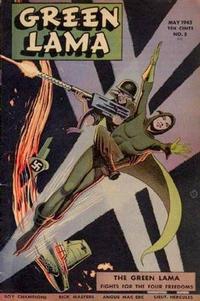 The Four Freedoms! (Table of Contents: 2)

Genre
superhero
Characters
The Green Lama [Jethro Dumont]; Tsarong; Pvt. Joe Johnson; Pvt. Jones; the Nazis (villains); Adolf Hitler (villain); Hermann Göring (villain); Joseph Goebbels (villain)
Synopsis
A letter from a Private in the Army brings the Green Lama to an Army camp, wherein resides a resident bigot. In order to bring the man to his senses, The Lama takes the soldier on a little trip to Nazi Germany.
Reprints

Although this story is signed by Raboy, only the first five pages are by him. Anderson takes over the rest, which can be easily seen by the faces with more lines than Raboy's very "economic" use of lines. He never makes more than necessary, while Anderson have some short inklines under the outer corner of the eyes, and also his special mouth with two lines that don't meet in the middle. Also the sleek Raboy-figure of Green Lama is missing in these pages, he is not as long legged as his. The faces on the last page gives Anderson most away, with round eyes, very thin eyebrows higher up than Raboy, and those peculiar small lines under the outer eye corners. No two-lined mouth here, since everybody are smiling. Compare with the signed Anderson story in "Mr. Scarlet and Pinky", Wow Comics #34. Anderson is credited on Green Lama by Jerry Bails' Who's Who, but no credits are found on any of the Green Lama features in Green Lama. Information added by Steinar Ådland 2011-9-11.

Genre
adventure
Characters
The Boy Champions [Tuffy; Mickey; Wellington Smith]; Prentiss Hicks; "Ace" Ryan (villain); Windy (villain)
Synopsis
"Ace" Ryan sends out one of his aides to case a store for a robbery, and then discovers that an Easter display for children may interfer with those plans. Unfortunately for Ryan, his plans for the robbery also hit a snag with his aide is offered a contract to perform his magic act in the movies.
Reprints

Genre
humor
Characters
Mike McTigg; Pop
Synopsis
Mike and Pop are on a hunting trip, not having much luck, when a freak accident occurs and brings the hunt to an unfortunate end.
Reprints

Genre
adventure; aviation
Characters
Rick Masters; Twin Eagles [aka Mike]; Mr. Gibson (villain)
Synopsis
Rick and Mike find themselves 100,000 years in the past after being hired to fly "blind" to San Francisco using only a televisor invention.
Reprints

Sauce for the Sorcerer! (Table of Contents: 9)

Genre
adventure; fantasy-supernatural
Characters
Angus McErc [aka Mac Erc]; Oberon
Synopsis
Angus decides that his peculiar talents are better suited in Great Britain than in the United States, so he boards a ship for Europe, not realizing he will battle head to head with another sorcerer.
Reprints