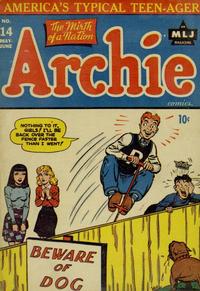 The Little Things In Life (Table of Contents: 2)

The Patriot (Table of Contents: 4)

A Friend In Need (Table of Contents: 5)

Title from the reprint in the 2018 collection The Best of Archie: Betty and Veronica Vol. 2.

Be Lovely With Betty and Veronica (Table of Contents: 8) (Expand) /

All Steamed Up (Table of Contents: 9)

This story originally appeared in Pep Comics (Archie, 1940 series) #36, but this version has a different first page and has replaced the epilogue with an ad for the scrap drive.