Pinup of the Year (Table of Contents) 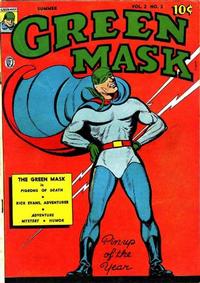 The Pigeons of Death (Table of Contents: 1)

Genre
superhero
Characters
Green Mask; Johnny Green; Suzie; Ronnie; Rummy
Synopsis
Johnny, Suzie and Ronnie take a walk, then return to Ronnie's rooftop pigeon coop and find criminals have stolen some of his birds and killed the rest. They plan to make the pigeons flying bombs to down an FBI airplane. Johnny becomes the Green Mask and fights the crooks but Ronnie, the Green Mask and Suzie are captured. The crooks use rockets to send their 3 prisoners skyward as well, with bombs tied to them. Ronnie uses his lead pigeon to cause the rest of his flock to avoid the FBI plane. The bombs are dropped on the crooks' cave hideout and the "robber sub" waiting to pick them up.
Reprints

Jack Fiske is a house byline for this feature.

As in one story in the previous issue, Johnny Green is aware he can change into the Green Mask if he gets angry and shouts.

Tale of the Counterfeit Coins (Table of Contents: 3)

Hap Harris was a house byline for this series.

The Ghost of Purple Rock (Table of Contents: 4)

First Line of Dialogue or Text
That old witch is in for a big surprise...
Genre
anthropomorphic-funny animals; children; fantasy-supernatural
Characters
Snooky; Honey Bear; Jinnee; Old Witch
Synopsis
Snooky and her friend Honey Bear use a magic wishing ring to summon Jinnee. They ask him to take them to see the Old Witch. The witch threatens to turn them into cookies but Honey Bear uses the ring to convert her previous victims back into children and change the witch into a cookie herself.
Reprints

Toby was the house byline for this series.

The Marauder Comet (Table of Contents: 6)

Genre
science fiction
Characters
Rick Evans; Stringbean; Professor Astra; Father Astra; Igno
Synopsis
Astra's scientist father is abducted by a "horrible being" while in the midst of experimenting on the dangerous element X090. If he isn't rescued, X090 may destroy Earth. Father Astra is taken to the planet Pyrotis, ruled by Igno, who demands the secret of X090. Rick and the others arrive and foil Igno's plans, but are too late to prevent X090 from blowing up the Earth. However, the whole story was Stringbean's nightmare.
Reprints

Stan Ford was the house byline for this feature.