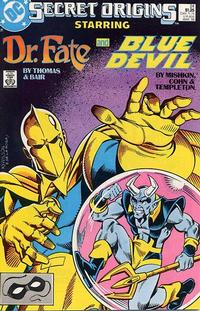 Genre
superhero
Characters
Cain; Jerry; Jerry's brother and sister; Dan Cassidy; Nebiros; Charley; Wayne; Znarg; Sharon; Marla; Norm; Superman (cameo); The Trickster (cameo)
Synopsis
Cain shows some kids the true story of the Blue Devil by drawing the dream images from Dan Cassidy and showing them on their TV instead of the video of the Blue Devil movie they were going to watch.

Narrated by Cain of the House of Mystery.

The Secret Origin of Dr. Fate (Table of Contents: 2)

Based on the first few stories from More Fun Comics.

Job Number
L-3016
Characters
Legion of Super-Heroes; The Atom [Al Pratt]
Synopsis
Information on the two stories in this issue and additional history of Dr. Fate.

Letters from: Charles J. Sperling; John Q. Gerdes; Gary Thompson; Robert "the Emperor", along with a thumbnail of the cover for Secret Origins #25 rendered in black-and-white.