First Line of Dialogue or Text
Starting this issue: The amazing and unique adventures of The Batman!
Genre
superhero
Characters
The Batman [Bruce Wayne]
Reprints

Arlen Schumer has identified panel 5 of the January 17, 1937 Flash Gordon Sunday page by Alex Raymond as the source of Batman's pose. 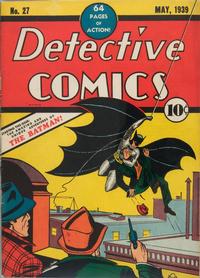 On the inside front cover. Seven separate panels.

The Case of the Chemical Syndicate (Table of Contents: 2)

Named "The Bat-Man" in the story.

According to Will Murray and Anthony Tollin, the November 1, 1936, Shadow novel Partners in Peril, written by Theodore Tinsley, was Bill Finger's inspiration for this story.

According to DSK of the Vallely Archives blog, and Robby Reed of the Dial H for Blog, the art in this issue is inspired by Henry Vallely's Gang Busters in Action (Big Little Book 1451) and Tom Lovell's art in Partners in Peril.

First Line of Dialogue or Text
Good-night, boys - now don't forget your good deeds!
Genre
humor; children
Synopsis
A young boy scout discovers a lost youngster, attempts to help him find his way home, but gets lost in the process himself!
Reprints

The Killers of Kurdistan (Table of Contents: 5)

First Line of Dialogue or Text
Well-- what's up?
Genre
detective-mystery
Characters
Speed Saunders; Tom (Trelawney's friend, death); Trelawney (death); Trelawney's maid; The Veiled Prophetress of the Killers of Kurdistan (villain); Killers of Kurdistan (villains, one dies)
Synopsis
Speed investigates the murder of two men, on one of whom the killers left the symbol of a red crescent. This is the symbol of the Kurdistan Killers, a sect that both men belonged to but refused to kill for.
Reprints

Story printed in red, white and black only.

[The Mysterious Murders] (Table of Contents: 7)

[Murder on the Oceanic Line Docks] (Table of Contents: 8)

Death on the Airwaves (Table of Contents: 9)

First Line of Dialogue or Text
The large and spacious Studio A, of the Federal Broadcasting System, was filled with an appreciative audience.
Genre
crime
Characters
Richard Drew (death); President Benson; Captain Richard Byrne; Brian DeAngelo (villain)
Synopsis
Captain Byrne tracks down a revengeful killer who was once spurned in regards to a radio audition.
Reprints

Artist credits by Craig Delich. There are two illustrated advertisements found on the two pages: one for Daisy Air Rifles, the other by the Crowell Publishing Company.

First Line of Dialogue or Text
You would be a dead man now if it were not for your friend in China...
Genre
adventure; crime
Characters
Rev. J. D. Eltham; Greba Eltham; Sir Dennis Nayland Smith; Vernon Denby; Dr. Petrie; Dr. Fu Manchu (villain)
Synopsis
Fu Manchu attempts to kill Greba Eltham, all in an attempt to keep Rev. Eltham from going back to China.
Reprints

First Line of Dialogue or Text
The Free City of Danzig, located about 250 miles from Berlin, has been a most important commercial city of central Europe for centuries, but at the moment its political importance is overshadowing all others claims of distinction.
Reprints

Story printed in red, white and black only.

[The Murderer on Vacation] (Table of Contents: 16)

First Line of Dialogue or Text
Out joy-riding, to relax from the tension of manhunting, Slam Bradley, tough private detective, and his partner pal, Shorty Morgan, find the ride no pleasure when a hurtling sedan forces them off the road, as it whizzes by at a terrific rate of speed!
Genre
detective-mystery
Characters
Slam Bradley; Shorty Morgan; Dick Kelly (death); Gale Dennis (villain); "Black Jack" Benson (villain); Nicky (villain); Helger Wetjen (villain)
Synopsis
Shorty and Slam help to find out the whereabouts of a Federal agent who disappeared after trailing an escaped felon to Switzerland.
Reprints