Double-Sized Issue
This issue has variants:

Fall of the Mutants Tie-In (Table of Contents) 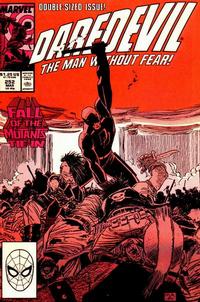 Genre
superhero
Characters
Daredevil [Matt Murdock]; Black Widow [Natasha Romanova]; Karen Page; Bad Seed [Cain] (death); The Fatboys; Lance; Ammo (villain, first appearance); Bullet (villain); Archangel (cameo); Famine (cameo)
Synopsis
New York is in a blackout due to the assault by Apocalypse's Horsemen, and Daredevil and crew have to keep Ammo and his gang away from the ordinance they are trying to steal.
Reprints
Keywords
Fall of the Mutants

Fall of the Mutants Tie-In