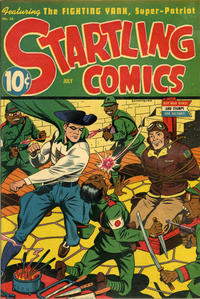 First Line of Dialogue or Text
When Z-99, the new master-tank of America...
Genre
adventure; fantasy-supernatural
Characters
The Fighting Yank [Bruce Carter III]; Joan; Professor Prescott; Nazi spies [Heintich; rest un-named] (villains)
Synopsis
Getting a phone call from his partner, Professor Prescott, Bruce races to the lab only to discover that Prescott and their new invention: the Z-99 tank, are missing.
Reprints

First Line of Dialogue or Text
Retreating before the avenging forces of America's fighting army and navy, the Japanese turn their attention to our homefront, in a campaign of sabotage to choke our war effort!
Genre
superhero
Characters
Pyroman [Dick Martin]; Professor Clark; Joyce Clark; the Japanese [Mybushi (a spy); others un-named] (villains, some die)
Synopsis
A group of Japanese disguise one of their spies as Pyroman and send him to America armed with a hand-held shocker, simulating the hero's powers. They hope to commit sabotage in America openly, blaming it on Pyroman.
Reprints
Keywords
Daily Flash

Reward for a Killer (Table of Contents: 3)

[Origin of the Scarab] (Table of Contents: 4)

Genre
adventure; fantasy-supernatural
Characters
The Scarab [Peter Ward] (origin, an archaeologist, Joab's nephew, reincarnation of Egyptian writer Kor the High Priest of the Cat-God, introduction); Uncle Joab (Peter's uncle, introduction); a black cat (the reincarnation of Egyptian Priest Ahk-Tu-Men, introduction); Ramon Royale (villain, introduction); Royale's gang (villains, introduction for all); band of Bedouin pirates (villains, introduction for all, some die)
Synopsis
With the financial backing of his uncle, Peter sets out for Cairo, Egypt, to discover the mysteries of the tomb of a famed Cat-God and the jewels hidden within. Within the tomb, Peter discovers a mummy in a sarcophagus holding a scroll that foretells a priest being reincarnated into the body of one Peter Ward!
Reprints
Keywords
Cairo; Cat-God; Egypt; Priest Ahk-tu-men

Next appearance in Exciting Comics #42.

Peter Ward experiences a thunderous explosion after rubbing a ring from a tomb that he has donned and finds himself dressed in the uniform of the Scarab, and has the powers of levitation. By rubbing the ring again, he returns to the Peter Ward personna.

First Line of Dialogue or Text
A smashed window...
Genre
adventure; children; war
Characters
The Four Comrades [Buzz Brandon; Tommy Tomkins; Pudge O'Connor; Tip Addams]; an Axis spy-ring [Heinrich; Karl; Hilda; others un-named] (villains)
Synopsis
The fellas are playing a game of baseball and hit the ball into the Samuel Hotchkiss Estate grounds. When they go onto the grounds to retrieve the ball, they discover a nest of Axis spies who have absconded with secret American plans for an anti-radar machine!
Reprints