On-sale date from DC Releases #48, confirmed from copyright registration.
This issue has variants: 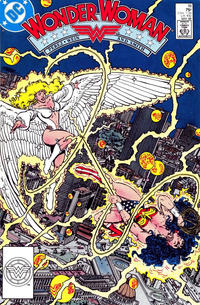 Bird of Paradise / Bird of Prey! (Table of Contents: 1)

Job Number
G-3518
Genre
superhero
Characters
Wonder Woman [Diana]; Steve Trevor; Silver Swan [Valerie Beaudry]; Lieutenant Michael Shands; Inspector Ed Indelicato; Maxine Sterenbuch; Henry Cobb Armbruster; Vanessa Kapatelis; Barry Locatelli; Eileen; Skeeter LaRue; Allison Clooney; Mrs. Kafora; Mr. Choi; Superman (on poster and on phone, unseen); Chrissie Fenton; Myndi Mayer; Hermes
Synopsis
When the fight at the fair gets out of hand, the Silver Swan delivers Henry Cobb Armbruster's warning and flees the scene, but Wonder Woman follows and the two fight to a draw in the skies over Boston. Later, Diana discusses her feelings for Superman with Vanessa who urges Diana to get Myndi to set up a meeting between the two, while Hermes is being pursued across the halls of Olympus by an unseen foe.
Reprints