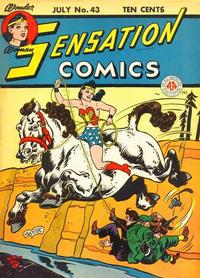 The Story of Pennsylvania (Table of Contents: 6)

Credits from reprint. We formerly credited the art to Don Cameron in error.

The Crimes That Couldn't Work! (Table of Contents: 12)

Genre
superhero
Characters
Mr. Terrific [Terry Sloane]; Herman Strong (villain, introduction)
Synopsis
Herman Strong can't sell his stories because the crimes are too unbelievable, so he tries to commit them for real.

The Man Who Worked for Nothing!! (Table of Contents: 14)