[planet is target for rocket] (Table of Contents) 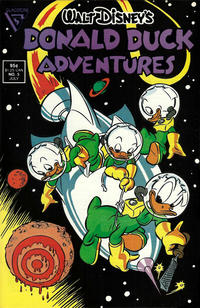 Voyage to Moonbase One (Table of Contents: 2)

Rocket Race to the Moon (Table of Contents: 4)

A Hole in Ones (Table of Contents: 6)

Issue lists art credits as: Daan Jippes (pencils), Jules Coenen (inks). Unsure where indexer found Frank Smith credits (noted December 2008, by Donald Dale Milne, a GCD editor).
I'm not the indexer, but it says on the Lambiek site that Frank Smith drew the Donald Duck daily strip from 1975 until 1986. Since this daily is dated December 13, maybe it is by Daan Jippes and Jules Coenen.