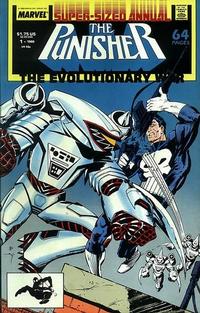 Genre
crime; superhero
Characters
Punisher; VILLAINS: Eliminators; El Caiman (Death)
Synopsis
Punisher is in Bogata to take down a drug lord but ends up fighting with him against men in Eliminator power suits.
Reprints

Genre
crime; superhero
Characters
Microchip; Felicia, Rudy (Microchip's godson, appears on photo only), Jim Nugent (dies)
Synopsis
The widow of Microhip's old friend has remarried a Jim Nugent, who is revealed to be an assassin. When Felicia leaves him, Nugent tries to kill her. Microchip intervenes.
Reprints

The Punisher's Warehouse (Table of Contents: 4)