On sale date from the publication date and volume number found at the Catalog of Copyright Entries, Part 2, Periodicals, New Series, Volume 34, 1939, Number 2. Class B periodical. Copyright number B 411862.

Art previously credited to Joe Shuster, but this looks far more like Boring. 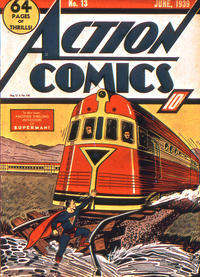 [Superman vs. the Cab Protective League] (Table of Contents: 2)

First Line of Dialogue or Text
The cab in which Clark Kent...
Genre
superhero
Characters
Superman [Clark Kent]; Carlyle; Reynolds (villain); Ultra-Humanite (villain, introduction)
Synopsis
Superman decides to wage war against the Cab Protective League, a firm trying to victimize the independent cab companies. But when he thinks the situation has been resolved, he comes to face a new threat: the Ultra-Humanite, a foe who gained from a scientific experiment the most agile and learned brain on Earth...a foe who seeks to dominate the world!
Reprints

The "S" symbol first appears on Superman's cape. Oddity: Superman is overcome by a sheet of flame and states that he nearly perished in a burning cabin. Some notes & synopsis added by Craig Delich.

Paul Cassidy is credited with adding the "S" symbol to the cape (but it only appears in some panels and not others), and the pencils and inks here look like his work. Note in particular the odd flying poses of Superman in panels one and five of the final page, which are characteristic of Cassidy. He claimed that Siegel and Shuster gave both he and Wayne Boring free reign to interpret the scripts as they liked.

First Line of Dialogue or Text
Rusty, the inactivity in this town has been terrific here of late...
Genre
adventure; crime
Characters
Scoop Scanlon; Rusty; George Hawking (dead body); William Davis
Synopsis
Scoop and Rusty are driving around hoping to find a story, when they spot a dead body on the steps of a house. William Davis exits the house and tells them that the dead man was a member of a party which found the Ibor jewels in India. Since that time tragedy has befallen all four of the members. Scoop eventually solves the all-too-human mystery.

First Line of Dialogue or Text
Goodbye, mi amigo...
Genre
adventure
Characters
Pep Morgan; Captain Sindra; Killer Dunn
Synopsis
Pep boards a boat leaving south America to journey home. Captain Sindra escapes jail and spies his old mate Dunn on the docks. Under a false name Sindra signs on as a crew member. During the voyage he and Dunn plan a mutiny, but Pep overhears them and thwarts their plans.

The Swamp of Satan (Table of Contents: 11)

No feature logo or banner.