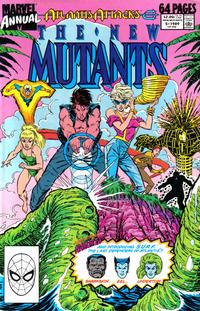 Here Be Monsters! (Table of Contents: 2)

Gallery of Former Members of the New Mutants (Table of Contents: 3)

[Gallery of Former Members of the New Mutants] (Table of Contents: 4)

A Case of the Cutes (Table of Contents: 5)

This story probably occurs between New Mutants #76 and #77.

The New Mutants (Table of Contents: 6)

[Namorita and Surf] (Table of Contents: 7)

Chapter 9 of the Saga of the Serpent Crown, which ran through all of Marvel's 1989 annuals (occurs between Avengers Annual #18 and X-Factor Annual #4).