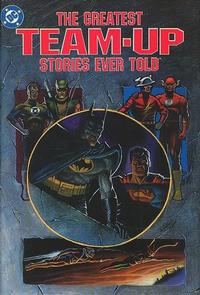 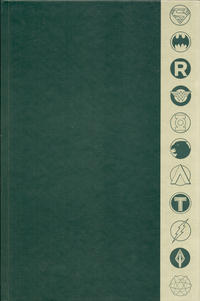 The Ghosts of Frank and Dick Merriwell (Table of Contents: 2)

That Old-Time Magic (Table of Contents: 3)

Text Article with image of Robin shaking hands with Superboy.

The Terrible Trio (Table of Contents: 4)

Superman's face appears to be drawn by someone other than Sprang, possibly Al Plastino. With inking by Superman regular Kaye images become coherent.

Manhunt on Land (Table of Contents: 7)

The Underwater Archers (Table of Contents: 8)

The Flash of Two Worlds (Table of Contents: 9)

Crisis on Earth-One (Table of Contents: 10)

Crisis on Earth-Two (Table of Contents: 11)

Planets in Peril (Table of Contents: 12)

The Challenge of the Expanding World (Table of Contents: 15)

The Thousand-and-One Dooms of Mr. Twister (Table of Contents: 16)

Inks are credited to Charles Paris in the book, but his involvement is minimal. He only inks the faces of Robin (and Batman in two panels), and even the splash panel, in which Robin is upside down in the air, has Premiani inks on his face. The remainder has Premiani inks throughout.

No Evil Shall Escape My Sight (Table of Contents: 17)

Genre
superhero
Characters
Green Lantern [Hal Jordan]; Green Arrow [Oliver Queen]; Jubal Slade; Guardians of the Universe; Jeremy Tine; Martin Luther King, Jr.; Robert Kennedy; Old Timer
Synopsis
Green Arrow shows Green Lantern the plight of the people living in the tenements of slumlord Jubal Slade. But when the Guardians of the Universe observe GL roughing up Slade, they bring him to Oa and reprimand him. Against their orders GL returns to Earth and collects evidence to put Slade away. In response, the Guardians contact Green Lantern, but Green Arrow argues that there are serious problems across America that have escaped the attention of Green Lantern. The Guardians confer, and decide to send a representative to accompany the two heroes as they go on a journey of discovery.
Reprints

Though the splash page still features only a "Green Lantern" logo, the cover logo changed to "Green Lantern Co-Starring Green Arrow" with the original printing. Page 6 is a 2/3 page; page 16 is a 1/2 page; and page 23 is a 2/3 page. The Guardian who is assigned to accompany Hal Jordan is generally called "The Old Timer" in this series, though he is later given the name Appa Ali Apsa. Credits for script, pencils and inks confirmed from Julius Schwartz's editorial records, provided by DC Comics (April 2007).

The Greatest Green Lantern of All (Table of Contents: 18)

The Jungle Line (Table of Contents: 20)