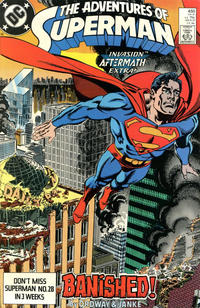 "Thanks are in order to John Byrne for initiating the storyline Roger Stern and Jerry Ordway have been doing these past months... as well as to Mike Machlan for his part in the creation of Gangbuster. Thanks, guys!"