On sale date is from Catalogue of Copyright Entries. 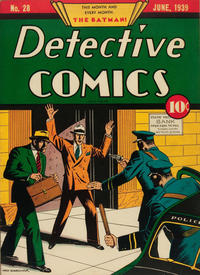 In his book "Men of Tomorrow: Geeks, Gangsters and the Birth of the Comic Book" (Basic Books, 2004), Gerard Jones incorrectly attributes the inks to Jerry Robinson.

First Line of Dialogue or Text
Joe used to be a juggler in the circus!
Genre
humor

The Dope Ring (Table of Contents: 5)

Killing by Proxy (Table of Contents: 6)

[The Bagilan Ruby] (Table of Contents: 8)

Script previously credited to Hickey, but the Who's Who reveals only art credits.

First Line of Dialogue or Text
Have you ever seen George Washington with a mustache?

[The Whitethorne Inheritance] (Table of Contents: 14)