Into the Lair of the Brain Leeches! (Table of Contents)

Inks originally credited to Don Heck by original indexer. Nick Caputo suggested it was possibly Josef Rubinstein (via the GCD Error Tracker [Error 3843]). Terry Staats confirmed via Facebook Messenger, on 18 September 2018, with Josef Rubinstein that the inker was Tom Palmer. 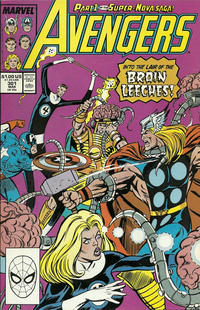