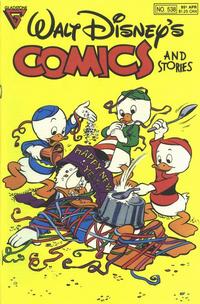 The original writer and artist (listed above) are not credited in the issue. Instead, a blanket credit reads: "...produced in The Netherlands by Oberon Publishing".

No published lettering credit. Completely unrelated to the gag on positive thinking and self-confidence, Pooh pushes Piglet up a hill in a soapbox racer.

The Great Pop Up (Table of Contents: 5)

First Line of Dialogue or Text
Looks as if Duckburg's super rocket is about ready to blast off for the moon!
Genre
anthropomorphic-funny animals
Characters
Gyro Gearloose; Gyro's Helper; a bunch of bluebirds; two astronauts
Synopsis
Gyro frustrates himself trying to repair his old toaster - then invents a new one that, with a little help from a lightning bolt, far exceeds expectations.
Reprints
Keywords
astronauts; bluebirds; doing-something-their-own-way; frustration; inventor; moon landing; toaster

Mickey Mouse and the Li'l Lost Elephant (Table of Contents: 6)

Job Number
OS 411-04
First Line of Dialogue or Text
Hey! Watch where you're goin'!
Genre
anthropomorphic-funny animals; humor
Characters
Mickey Mouse; Goofy; Babykins (baby elephant); circus truck drivers; circus owner
Synopsis
Goofy rescues a baby elephant that has fallen out of a circus truck. Unsure about what to do, he brings the loveable but rambunctious pachyderm to Mickey's back yard, where the mouse is adding a new room to his house. Elephants and home improvements don't mix.
Reprints
Keywords
best of intentions; circus; elephant; home improvement; lost animal; series of mishaps

Placed at the bottom of the back cover.