On-sale date from Cross Talk column in this issue.
This issue has variants:

[The Log of the Nancy Bell] (Table of Contents)

An octopus waylays the treasure-diving ducks. 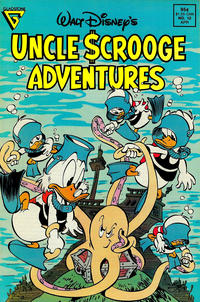 The Log of the Nancy Bell (Table of Contents: 2)

Title from credits on inside front cover. No title on story.

Hound of the Whiskervilles (Table of Contents: 4)

Job Number
US 29
First Line of Dialogue or Text
It is a foggy night on the moors of Scotland!
Genre
anthropomorphic-funny animals; humor
Characters
Uncle Scrooge; Donald Duck; Huey; Dewey; Louie; Angus McWhisker
Synopsis
Scrooge returns to Scotland to find a piece of the family tartan, only to learn that the Hound of the Whiskervilles—the family that was an ancient rival of the McDucks—has returned to the Moors.
Reprints
Keywords
disguise; exploring; fog; hoax; Hound of the Baskervilles; modern art; moors; mystery; Scotland; tartan

Placed at the bottom of the back cover.