Statements of ownership from this period list Will Harr, rather than Chesler himself, as editor.

Feature order corrected by the folks at comicbookplus.com. 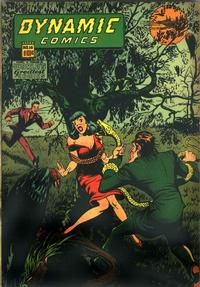 The Tangerine Terror (Table of Contents: 1)

First Line of Dialogue or Text
Into a small mining town rode The Echo...
Characters
The Echo [Jim Carson]
Synopsis
The Echo and his allies battle a small town snake cult.
Reprints

Originally credited to Gus Ricca, but this is Joe Beck who is credited on this feature by Jerry Bails' Who's Who, and the art is identical to his credited feature Prehistoric Pete in Red Seal Comics #14. Eppers is also credited on Ima Slooth, but he shows the teeth when gaping, but Beck seldom does.

Fitch's and Ricca's names are on tombstones in the first 2 panels (as are those of George Tuska, Ken Battefield, Ottowe (Eppers), and Beck and Eppy).

Originally credited to Sam Cooper, but this is Gus Ricca with his "well fed" faces. Compare his art on Jim Doolan in Slam-Bang Comics #1 and 7, and the art sample in Jerry Bails' Who's Who.