First Line of Dialogue or Text
It's a dirty job but somebody has to draw it...
Genre
humor
Reprints 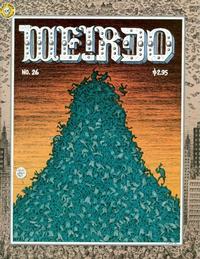 A Mother and Daughter Chat (Table of Contents: 1)

Dinner at Ben's (Table of Contents: 2)

In her letter Boyce details her conversion to Christianity and renounces all her previous artwork. She also states that she burned all her artwork made from 1980-88. Included on the page are a small-size panel from Weirdo and a Christian-themed illustration of hers that quotes "Romans 6:23."

You May Tie Your Shoestrings in the Morning, but the Undertaker May Untie Them Before Night. (Table of Contents: 5) (Expand) /

How I Got Published In A Big Glossy Magazine (Table of Contents: 6)

A Bird in the Beard (Table of Contents: 8)

Quaker School Q-Ties in Plan Against The Boys (Table of Contents: 9)

First Line of Dialogue or Text
Red - green - blue - orange that's all the bright I go. Time is a fool with a banjo!
Genre
adventure; science fiction
Characters
Big Bitch; The Nubbin; Ernestine; Asquith; The Fat One
Synopsis
Big Bitch acquires a formula enabling the total recall of dreams
Reprints

A Scam a Day: Growing Up as Arnie's Girl (Table of Contents: 11)

The Gal for Stan (Table of Contents: 13)

Title corrected by Jon B. Cooke via the GCD Error Tracker.

Genre
humor
Synopsis
A pigeon with a surprise.
Reprints