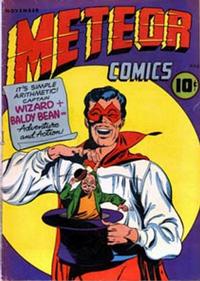 First Line of Dialogue or Text
He's only 5 ft. 4 but wide as a door...
Reprints

Information on this sequence supplied by Arthur Lortie, September 2004.

[Pan, the Phoenix and Neptune at the Center of the Earth] (Table of Contents: 4)

First Line of Dialogue or Text
Sucked down into a maelstrom, Race Wilkins comes to, only to find himself in the place that nightmares come from!
Reprints

First Line of Dialogue or Text
Imagine being marooned on the mythical planet of Brutus...
Reprints

Gary Watson (March 2008) believes the art is by George Marcoux, but Terry Beatty (February 2009) and Jerry Bails' Who's Who indicate Charles Voight.


This issue was most recently modified by:
Issues in this series have been indexed by:
If you believe any of this data to be incorrect, please let us know.
Cover thumbnails are used for identification purposes only. All rights to cover images reserved by the respective copyright holders.