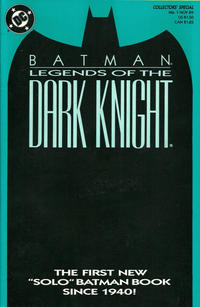 The writer explains the logic behind the double cover and importance of the debut of a new Batman solo book, the first since 1940. This appears on the inside front (outer) cover.

Shaman, Part One of Five (Table of Contents: 2)

Traditional cover format with price and date, but inside outer cover for this issue. Dean Motter did the cover design and logo for this first arc.

Shaman, Book One (Table of Contents: 3)

Genre
superhero
Characters
Batman [Bruce Wayne]; Alfred Pennyworth; Thomas Woodley (villain, introduction); Tribal Shaman; Shaman's daughter
Synopsis
Bruce Wayne (pre-Batman) studies with a bounty hunter tracking a criminal in Alaska. He is saved by a Shaman who tells him a story about a bat and a raven, while wearing a ceremonial bat-mask.
Reprints

The Batman Year One story is expanded a bit in this storyline.

This is a poster for the movie Shocker from Wes Craven.

Batman silhouette on back of outer cover.