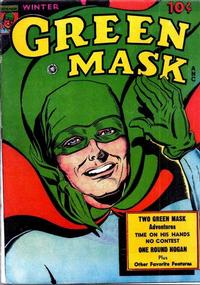 Statement of the Ownership, Management, Circulation, Etc. (Table of Contents: 2)

First Line of Dialogue or Text
No Contest
Genre
crime; superhero
Characters
Green Mask; Johnny Green; Suzie; Slick; Pint
Synopsis
A theatre sponsors a Green Mask lookalike contest. Johnny's friend Suzie enters, but little-person criminal Pint and his henchman Slick decide to steal the charity funds that the contest will raise. Pint dresses up like the Green Mask and scares away the other contestants. When Johnny sees Suzie being manhandled, he becomes the real Green Mask in anger. He rescues Suzie and foils the criminals' plot.

(title from cover); first line is ["Who would have thought that shy little Johnny Green..."]

The last panel, with the solution, is printed upside-down.

First Line of Dialogue or Text
Time On His Hands
Genre
science fiction; superhero
Characters
Green Mask; Capt. Kidd; Johnny Green; Suzie; Bigus Bossus
Synopsis
Johnny and Suzie ascend in a balloon, but Johnny changes into the Green Mask when he sees some crooks assaulting a policeman. The Green Mask rejoins Suzie and they reach "the place where space is curved." They travel in time to Captain Kidd's pirate ship, then go into the future to the year 9484 where they are nearly eliminated because they carry germs. The Green Mask and Suzie return to their own time at last.

(title from cover); first line is ["Little Johnny Green, whose fury against crime and injustice..."]

You Can't Be Too Sure (Table of Contents: 7)

First Line of Dialogue or Text
One Round Hogan eliminates 'Slack' Slattery...
Characters
One Round Hogan; Spigot Barnett; Spider; Blimp; Sack [Slack] Slattery
Synopsis
Hogan's manager is abducted and a substitute gives him bad advice during his bout against Slattery. Spigot escapes and arrives in time to prevent Hogan from being drugged. Hogan wins the fight.

Genre
humor; children
Characters
Patsy
Synopsis
A little girl has a birthday party for her friends, and her African-American maid takes the brunt of their inadvertent abuse.