Kubert inserted an extra Blackhawk in the cover scene. 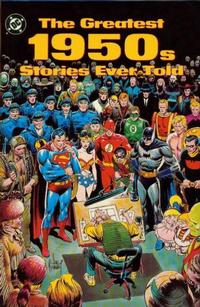 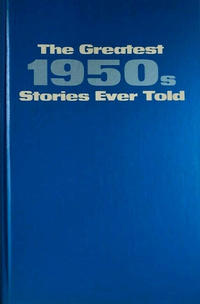 This table of contents indicates a public service announcement featuring Peter Porkchops that is not in the book.

The Super Bat-Man! (Table of Contents: 4)

Genre
superhero
Characters
Superman; Batman [Bruce Wayne]; Robin [Dick Grayson]; Lois Lane; Commissioner Gordon; Professor Pender; Alfred Pennyworth
Synopsis
Superman and Batman are both on the trail of Professor Pender, a criminal genius. But when they find him, Pender exposes Superman to a "decharging ray," which takes away his powers, and Batman accidentally steps in front of Pender's activated super-charging machine, giving him superpowers. While Superman and Batman adjust to their new abilities, they track down Pender and stop him from recreating his super-charging ray and using it on himself.
Reprints

The Black Cougar! (Table of Contents: 5)

Escape to the Stars (Table of Contents: 6)

Genre
superhero
Characters
Martian Manhunter [John Jones; J'Onn J'Onzz]; Captain Harding (intro); Alex Dunster; Professor Erdel (flashback; cameo)
Synopsis
John Jones discovers that Alex Dunster, who acquires and sells scientific and technical items of great value, has gotten hold of the machine that Professor Erdel used to bring J'onn J'onzz from Mars. Jones realizes that if he uses the machine to return to Mars, however, Dunster would be free to continue his criminal ways. So Jones confronts Dunster, but Dunster destroys the machine before surrendering.
Reprints

Lobsters Away (Table of Contents: 7)

Genre
humor; children
Characters
Sugar; Spike
Synopsis
When Spike's father decides he can't eat a lobster, Spike gets to bring it home from the restaurant as a pet. Since baby animals can understand and speak baby talk, the lobster asks the kids to do him a favor, and they send him back to the sea.
Reprints

The Girl in Superman's Past (Table of Contents: 8)

The Mystery of the Giant Arrows (Table of Contents: 9)

Genre
superhero
Characters
Green Arrow [Oliver Queen]; Speedy [Roy Harper]; Xeen Arrow (guest); Alien Crooks (villains)
Synopsis
In another dimension, Green Arrow and Speedy meet Green Arrow's counterpart Xeen Arrow and discover that due to a passing comet, a gateway to their dimension has opened up, and the mysterious giant arrows they encountered on Earth are merely children's toys from this other dimension which have passed through the gateway. After solving the mystery, Xeen Arrow shoots them back to Earth through the gateway before it closes.
Reprints

Ed Wood credit is incorrect based on id from Martin O'Hearn.

Genre
jungle; adventure
Characters
Congo Bill; Janu
Synopsis
Congo Bill and Janu are taken as captives to a village populated by intelligent gorilas, but discover they are not what they appear.
Reprints

Genre
superhero; science fiction
Characters
Captain Comet; the Lamia; the Septarch; Professor Zackro
Synopsis
The ruling Septarch of the planet Lamia have chosen Earth as the place to exile their incorrigible criminals. But after the criminals steal a hydrogen bomb to fule their spacecraft in order to return to Lamia, Captain Comet tracks down the aliens and returns them to Lamia as prisoners.
Reprints

The Riddle of the Crystal Ball! (Table of Contents: 13)

Letterer from index of original printing.

Genre
superhero
Characters
Wonder Woman [Diana Prince]; Steve Trevor
Synopsis
A flashback story that tells how when Steve Trevor bet Wonder Woman that he could always pick her out in any situation, she adopted the identity of Diana Prince and concealed herself right under his nose.
Reprints

The Raid on Blackhawk Island (Table of Contents: 15)

Genre
adventure; war; military
Characters
Blackhawks [Blackhawk [also as The Question Mark]; Chuck; Andre; Olaf; Chop-Chop; Stanislaus; Hendrickson; Blackie]
Synopsis
When Blackhawk appears to have been killed, the rest of the team must face the War Wheel, the Flying Tank and Killer Shark's octopus, all under the control of the Question Mark, without their leader. But Chuck realizes the Question Mark is Blackhawk in disguise, and Blackhawk reveals that his ruse was a test to see who could best lead the Blackhawks in his absence.
Reprints

The Fox and the Crow / comic story / 6 pages (report information)

First Line of Dialogue or Text
Three hundred dollars??
Genre
anthropomorphic-funny animals; humor
Characters
Fox; Crow
Synopsis
When the Fox tries to collect a $150 debt from the Crow, the Crow swindles the Fox out of another $150, which he hands back as payment in full.
Reprints

Superboy and the Sleeping Beauty! (Table of Contents: 17)

Genre
superhero
Characters
Superboy [Clark Kent]; Lana Lang; Professor Lewis Lang; Org; Norg; Axel; Maxel; Jaxel; Alice
Synopsis
When Lana brings authentic African artifacts from her father's collection for the Smallville High School Drama Club to use, she is accidentally pricked by a blow gun dart and falls asleep. Superboy must acquire the antidote within three days, all the while convincing Professor Lang that nothing is wrong with Lana, or Lana will die.
Reprints

The Sorceror of the Sea! (Table of Contents: 19)

Genre
superhero
Characters
Aquaman; Jason Deeter
Synopsis
When sorcerer Jason Deeter appears to be able to control Aquaman, maritime hijackers try to use Deeter to force Aquaman to help them commit crimes. But Aquaman puts down the thugs and reveals that Deeter is not a sorcerer at all and that he and Deeter came up with this ruse to smoke them out.
Reprints

First Line of Dialogue or Text
I've got to watch these prisoners closely.
Genre
humor
Characters
Casey
Synopsis
While watching prisoners, Casey breaks up a fight, but needs help identifying one of the men.
Reprints

Identified in item as from January 1959.

Genre
fantasy-supernatural; horror-suspense
Characters
Johnny Peril; Lee Allen; Subara; Bill Davis; Jack Gordon
Synopsis
Johnny Peril finds his friend Lee Allen, who just before he dies swears he has seen Subara the Ice Queen, whom the natives believe lives on frozen Mt. Subara. Johnny returns to the mountain with two more friends, but only he encounters Subara. They refuse to believe he met the mythical woman until he produces her crown of roses.
Reprints

Genre
superhero
Characters
Batman [Bruce Wayne]; Robin [Dick Grayson]; Two-Face [Harvey Dent]; Tarando; Charles Ford; Commissioner James Gordon; John Fields Benson
Synopsis
When the reformed Harvey Dent tries to prevent a robbery, he is caught in an explosion and reverts to Two-Face. He embarks on a new crime spree, and Batman and Robin deduce that Two-Face is going after people who commonly show two faces to the world. At a ceremony making Bruce Wayne honorary chief of a local tribe, Batman and Robin are trapped by Two-Face and strapped to a giant coin. Two-Face flips the coin over a bed of spikes, and though the gimmick is rigged to land face down, the dynamic duo manages to create a magnetic field and flip the coin so that they land safely.
Reprints

Knight of the Future! (Table of Contents: 23)

Genre
superhero
Characters
Shining Knight [Sir Justin]; Sir Butch; Winged Victory; Dalmar; Inger; Merlin; King Arthur
Synopsis
When Merlin tries to bring Justin and Butch back to Camelot for a feast he accidentally sends them to the 35th century. There, they help prevent an attempt to overthrow democracy before Merlin brings them back to the past.
Reprints

Genre
fantasy-supernatural
Characters
Phantom Stranger; John Martin; Bart Benson; Carson Rand; Jim Thompson; Edgar Jones; Margo Phillips; Matt Wright
Synopsis
When three friends die in a plane crash, the spirits seem to be haunting those they left behind, but the Phantom Stranger reveals that the ghostly appearances are really the work of an embezzler attempting to cover his tracks.
Reprints

Marooned in the Fourth Dimension (Table of Contents: 25)

The Unmasking of Johnny Thunder (Table of Contents: 26)

Genre
historical; western-frontier
Characters
Johnny Thunder [John Tane]; Ma Pecos; Sheriff Tane; Arroyo Gang
Synopsis
When the Arroyo Gang kidnaps Sheriff Tane, Johnny Thunder thinks they must have killed his father, and tells the townsfolk that he is really Sheriff Tane's son. Johnny takes out the whole Arroyo Gang singlehandedly and happily finds his father alive. But his secret identity remains safe, as everyone assumes he was only honoring Sheriff Tane by his earlier declaration.
Reprints

The Coldest Man on Earth! (Table of Contents: 27)

Genre
superhero
Characters
Flash [Barry Allen]; Captain Cold [Leonard Snart]
Synopsis
Flash faces off against Captain Cold, who commits crimes by using a cold-gun to freeze things and create mirages. But once Flash figures out what Captain Cold can do, he ignores the mirages and takes the villain in.
Reprints

Genre
romance
Characters
Nan; Nola; Bob
Synopsis
Nan has always gotten her big sister Nola's hand-me-downs, but when Nola's boyfriend Bob shows an interest in Nan, Nola insists Bob was only trying to make her jealous. When Nan discovers a wedding dress in Nola's room, she assumes Bob and Nola have plans to marry, but Bob tells Nan that Nola manipulated situations to make it look like he was in love with her and he declares his love for only her.
Reprints

Genre
spy
Characters
King Faraday; Johnny Lester; Alonzo P. Davis; Vina Flora
Synopsis
King Faraday, on the trail of a killer, rides the Orient Express, where he meets a movie starlet and a camera-happy tourist. Though two attempts are made on his life, he finds no clues as to the identity of the killer. Only when the photographer overplays his hand does Faraday realize he is behind the attacks and using his camera to transport pictures of a more sensitive nature than the candids he has been taking. Faraday puts a permanent end to the photographer in a fight atop the train.
Reprints

Summons from Space! (Table of Contents: 30)

The World of Adventure in Books (Table of Contents: 31)

The Jimmy Olsen from Jupiter (Table of Contents: 33)

Genre
superhero
Characters
Jimmy Olsen; Superman [Clark Kent]; Edmund Willis; Barry Brand; Perry White; Vince Regan; Jeff Wacker; Dr. Wilmington
Synopsis
Jimmy agrees to be a test subject for a week for men from Jupiter. He is granted the ability to read minds, but is also turned into a green, scaly Jovian. He uses his abilities to compete for the Newsman of the Year, though he covers his appearance. Between scoops, Jimmy reads Clark Kent's mind and "hears" him think that he is Superman. Jimmy’s rival Vince Regan plans to expose Jimmy at the ceremony, but luckily a Jovian week is equal to five Earth days, and Jimmy has reverted to his old self by then. The Jovians declare the experiment a success and help Superman preserve his secret identity.
Reprints

The Secrets of the Sorceror's Box! (Table of Contents: 36)

Genre
adventure
Characters
Challengers of the Unknown [Rocky Davis; Professor Haley; Red Ryan; Ace Morgan]; Morelian
Synopsis
Four men escape a plane crash unharmed, decide they are living on borrowed time and vow to use it challenging the unknown. In their first case, they’re asked to open the four chambers of an ancient box. The chambers release: a stone giant that Prof. destroys by pure thought, a sun that freezes by consuming nearby heat that Red traps in a vacuum chamber, and a device that snarls things in plastic ribbons but is controlled by a dial on its container. Morelian opens the fourth and removes a ring, claiming the box says it contains immortality. He is wrong: immortality was in the box, not the ring.
Reprints