Faces, noses and especially the ears are all very similar to Battefield's credited work on this feature and elsewhere. 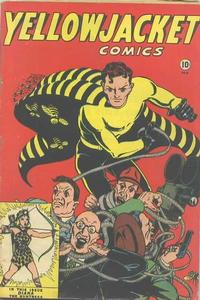 The Adventure of the Hollywood Blackmailers (Table of Contents: 1)

The Adventure of the Golden Horn Murder (Table of Contents: 2)

Genre
superhero
Characters
Yellowjacket [Vince Harley]; Dr. Ronald Nielson; Wilson; Count Vincent (villain)
Synopsis
The Golden Powder Horn of the pirate Alcazar, showing where he buried his treasure, is about to be sold to the museum by the slickest confidence man in the racket. Yellowjacket finds the horn to be a hoax.

Long faces and quite slow movements of figures point to Morey as artist.

Twain Shall Meet (Table of Contents: 4)

First Line of Dialogue or Text
'Lefty' Dugan thought he was one smart guy...
Genre
adventure
Characters
Danny King; Russo; Lefty Dugan; Henry Clayton
Synopsis
Protection racketeers put the squeeze on the Russo Circus, but Danny and a newspaper publisher come up with a plan to stop them.

This is by DeLay, who can be recognized by the "slow" movement of the rather short figures. Also faces and the layout style more like old book illustrations. Originally credited to William M. Allison. Allison has more wide open eyes, like in his Poe story in #1.

First Line of Dialogue or Text
Mutiny! The ugliest word on the high seas...
Genre
adventure
Characters
old sailor; Jed Saunders
Synopsis
Mutiny and shipwreck on an old windjammer rolling down to Rio, bad food and a worse captain. Even the story teller drowned, he said.

First Line of Dialogue or Text
Sure it's got corporal's stripes but it ain't mine!
Genre
humor

The faces and ears match Hicks' other story in this issue.