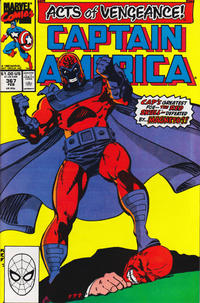 Genre
superhero
Characters
Captain America [Steve Rogers]; Namor, the Sub-Mariner; Hank Pym; Fabian Stankovitz; Red Skull; Crossbones; Magneto; Controller; Sleeper
Synopsis
Cap and Hank free Namor from the Controller's control. Cap battles the Controller once again but can't find his boss, the Red Skull, once the villain is defeated. That's because Magneto is beating the stuffing out of the Skull for his Nazi war crimes. Rather than kill him, Magneto seals the Skull in an unused fallout shelter with only ten gallons of water and time to consider his past crimes.
Reprints
Keywords
Acts of Vengeance

The Way of the Snake (Table of Contents: 2)