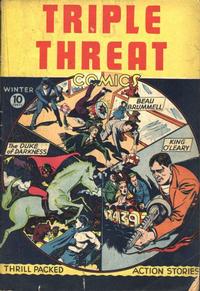 Murder in the Numbers Racket!! (Table of Contents: 1)

First line: "Many a ruthless killer and cunning racketeer..."

A "Believe It or Not" type of page.

First Line of Dialogue or Text
When horrible dreams come to life...
Genre
superhero
Characters
Duke of Darkness; P. G. Banks; Mr. Slumber (villain)
Synopsis
The Duke must battle Mr. Slumber, who has come back from the dead to give nightmares to a man who is, in life, mean and ruthless.
Reprints

Looks like this story could have inspired Steve Ditko on Doctor Strange and the villain Nightmare. Reprint info and synopsis added by Craig Delich 10-25-08. Gerona is thought to be surrogate of Rural Home whose work was produced by the Sangor Studio. Richard Hughes was the director/writer for Sangor during this time. This Duke story reads like Hughes and Hughes character Nemesis could be based on him. http://comicbookplus.com/?dlid=25367

Art is consistent with Albright’s signed Beau Brummel art from Atomic Bomb Comics #1 (1946), including how she draws women’s faces and the antihelix of the ear.

First Line of Dialogue or Text
When someone makes wild statements - and they come true...watch out!
Genre
science fiction; superhero
Characters
The Menace

Art is consistent with Froehlich’s signed art from Headline Comics #14 (July 1945), including his long, round noses and how he draws the sideways “L” inside the ears. Previous indexer suggested Charles Voight.

Al Pross signs his name with a line that goes from the final s, which makes his name appear to be Prossy in this comic.