Credits for this issue based upon Alberto Becattini's "Disney Index - Dell Comic Books" Vols. 1 and 2 (Italy, 1992 and 1994). Indicia title is "WALT DISNEY'S THE WONDERFUL ADVENTURES OF PINOCCHIO". No number in indicia or code number. Listed as "Four Color Comic No. 92" on cover. Code number is P.O.S. 461 (with blank space for issue number). Copyright 1939, 1945 by Walt Disney Productions.

Walt Disney's the Wonderful Adventures of Pinocchio (Table of Contents) 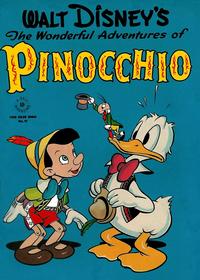 The Wonderful Adventures of Pinocchio (Table of Contents: 1)

Genre
fantasy-supernatural
Characters
Jiminy Cricket; Pinocchio; Gepetto; Blue Fairy; Figaro; Foulfellow; Gideon; Stromboli; Lampwick; Monstro
Synopsis
The Blue Fairy brings Gepetto's wooden puppet Pinocchio to life. Jiminy Cricket is enlisted as his conscience. Pinocchio is first captured by the evil showman Stromboli, but is rescued by the Blue Fairy. Not learning a lesson, Pinocchio is then enticed to travel with a coach load of boys to Pleasure Island. There they indulge in bad behavior until the boys turn into donkeys. Pinocchio is saved by Jiminy part-way through the transformation. In the meantime, Gepetto was swallowed by the whale Monstro while on his way to Pleasure Island to find Pinocchio. Pinocchio and Jiminy search for Monstro and the pair are re-united with Gepetto in Monstro's belly.
Reprints

Story begins on inside front cover in black and red. Abridged adaptation of the 1940 Walt Disney animated movie "Pinocchio." New version in Four Color (Dell, 1942) #252. Script credit for this sequence from Alberto Becattini (May 14, 2007).

The Wonderful Mis-Adventures of Donocchio (Table of Contents: 2)

Genre
anthropomorphic-funny animals
Characters
Donald Duck; Huey; Dewey; Louie; Blue Fairy; Jiminy Cricket; Foulfellow; Gideon; Stromboli
Synopsis
After reading the story of Pinocchio, Donald wishes he was Pinocchio. The Blue Fairy grants his wish and gives him two more wishes. As Pinocchio, Donald gets involved with Gideon and Foulfellow and ends up being sold to Stromboli. His lack of stage talent helps him escape when Stromboli flies into a rage. Donald tries to go to Pleasure Island, but the Coachman thinks he's a spy and chases him with guns. While he is escaping he wishes he could switch sizes with Jiminy. After a short chase, Donald wishes he was a real boy again. He ends up back in his own bed, waking up from a dream. Or was it?
Reprints

Story continues on inside back cover in black and red and concludes on back cover in color. Inks may or may not be by Walt Kelly.