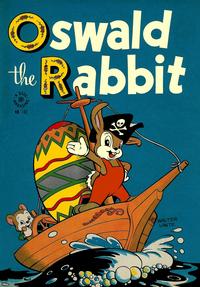 Ye Mappe of Oswald and Toby's Travels (Table of Contents: 1)

Genre
anthropomorphic-funny animals
Synopsis
Map of scenes from the story.

Inside front cover; black, red, and white. Pencils and inks credits for this sequence from Alberto Becattini (May 14, 2007).

Oswald Rabbit and The Great Egg Hunt (Table of Contents: 2)

Genre
adventure; anthropomorphic-funny animals
Characters
Oswald the Rabbit; Toby; Mister Skrats
Synopsis
The mortgage is due on Oswald and Toby's house. Mister Skrats, who holds the mortgage and wants them to default so he can dig for buried treasure in the cellar, tricks Oswald and Toby into heading to the mountains to seek the biggest egg, which would win a contest. If the contest wasn't fake, that is. The two find a roc's nest and the roc takes them to a tropical island where they become kings of a cannibal tribe.

Story continues on inside back cover in black, red, and white and concludes on the back cover in color. Lloyd White and Walt Kelly appear to share the art here, except for the last page, which looks to be both penciled and inked by Kelly. Pencils and inks credits and note for this sequence from Alberto Becattini (May 14, 2007). Reference to "John Stanley" in the dialogue on page 19 of the story.