On sale date from the publication date reported to the U.S. Copyright Office found in the Catalog of Copyright Entries, Part 2, Periodicals, 1945, New Series, Volume 40, Number 4. Class B periodical. Copyright registration number B 703060. On-sale date of November 16 in ad in Sensation Comics #49.

[Superman at Work] (Table of Contents) 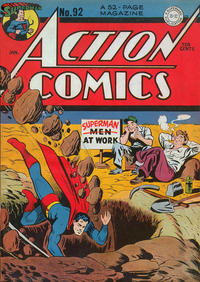 The Average American! (Table of Contents: 3)

The Bengal Woman! (Table of Contents: 5)

The Who's Who gives Alton Black as a byline for Blackman.

The Rainbow Plot! (Table of Contents: 13)

Genre
adventure; superhero
Characters
Zatara; Bowler (villain)
Synopsis
Bowler thinks Zatara's magic resides in his top hat and makes several attempts to steal it. He finally gives them the hat and they wish for new clothes and a new car, whereupon convict striped uniforms and a police patrol wagon ap[ear.

I Shall Show You How to Learn Radio (Table of Contents: 19) (Expand) /