Scripter Gardner Fox reports writing this story after the stories that appeared in #28 and #29, but had been shoehorned in ahead of them because it dealt in part with handicapped servicemen returning from military service, and DC wanted to get it out as soon as possible. DC had been asked to do such a story by the National Institute for the Handicapped, because war-injured veterans were attempting to re-integrate into society. This issue is mentioned in the 1951 edition of the Encyclopedia Americana, in the section on "comics" (Vol. 7, page 362d, column 1).

A Place in the World (Table of Contents) 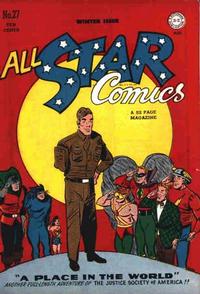 Watch for These New Issues of Your Favorite Magazines (Table of Contents: 2) (Expand) /

A Place in the World [Introduction] (Table of Contents: 3)

Genre
superhero
Characters
Justice Society of America [Dr. Mid-Nite [Dr. Charles McNider]; Wildcat [Ted Grant]; Wonder Woman [Diana Prince] (Secretary); The Flash [Jay Garrick]; Johnny Thunder; Green Lantern [Alan Scott]; Hawkman [Carter Hall]]; Fred Monday; Jimmy Monday (Fred's brother)
Synopsis
Fred Monday, once an all-scholastic football player, had a handicapped little brother who he always felt sorry for, remarking that he would rather be dead than to be like him. Soon, Fred went into the Army and overseas, where an artillery explosion severely left him without a right arm. In the hospital, his kid brother sent him a letter that lifted his spirits, but when people pitied him, he began to understand how his brother Jimmy felt when he had pitied him! Fred meets with the JSA at a soldier's hospital and asks for their help with some kids in the same situation.
Reprints

On page E, panel 3, there is an illustration used courtesy of the National Society for Crippled Children and Adults.

Genre
superhero
Characters
Hawkman [Carter Hall]; Edouard Laviere; unnamed Mayor; The Water Robbers (villains)
Synopsis
Hawkman finds young Edouard Laviere, who has infantile paralysis, walking with crutches and spending hours in a wheelchair. Hawk asks Ed to go along with him to track down the "water robbers," knowing that he swims every day in the pool as a part of his treatment. They locate the crooks at an isolated cabin. Hawk swoops to the attack, but makes it look like he's having a real struggle. Worried, Ed doffs his clothes, swims for help and brings back the Police. Hawkman gives all the credit to Ed, who is honored by the local high school, being named Assistant Swimming Instructor at the school.
Reprints
Keywords
Louisiana

Genre
superhero
Characters
Dr. Mid-Nite [Dr. Charles McNider]; Hal Porowski; Mr. Porowski (Hal's father); Ox Morgan (villain, lumberjack)
Synopsis
Dr. Mid-Nite meets up with young Hal Porowski, a totally blind youngster, who has been the recipient of pity ready to jump off a bridge to commit suicide, and stops him. Giving him hope, Mid-Nite asks Hal to help him track down Ox Morgan, who has been setting fires in his father's timberland. Hal uses his enhanced hearing to extinguish a lit fuse on dynamite and locate Morgan. Mid-Nite drops a blackout bomb and a battle ensues. Morgan and his men are captured. Afterwards, Hal tells Dr. Mid-Nite that this adventure has made him want to become a teacher, teaching braille to the blind.
Reprints
Keywords
Blackout Bomb

Speedy Wheeler Saves the Day and Wins a Bike (Table of Contents: 8) (Expand) /

Genre
superhero
Characters
Green Lantern [Alan Scott]; Sven Lindquist; Zuni-god (villain); Spirit Robbers (villains)
Synopsis
G.L. meets up with 16-year-old Sven Lindquist, a boy with an artificial arm, and a boy who is feeling sorry for himself because of the actions of other people. Sven desires a job at the local museum, but despairs until G.L. shows up and tells Sven that he needs his help in finding out about the Zuni-god Shu-lu-wit-zu, who had been demanding tribute from the natives in the area. Sven proves these robbers false and Sven helps mop them up. A few hours later, Sven is honored by the town fathers, who nominate him for the position of assistant curator for the museum.
Reprints
Keywords
City Courier; New Mexico; Power Ring; Sentinel; Standard Daily

This filler is NOT found in the Archives.

Genre
superhero
Characters
Wildcat [Ted Grant]; Anthony Cellini; gang of crooks (villains)
Synopsis
Wildcat goes to Big City to enlist the help of Anthony Cellini, who is nearly deaf, a condition unknown by his teacher and classmates. Wildcat learns that Anthony has learned the art of reading lips, so the Feline Fury asks Anthony for his help in rounding up a gang of crooks, but he refuses and goes to work not realizing that the people he works for are using him to move the stolen goods. Anthony uses his lip-reading skill to help Wildcat catch the crooks, then Wildcat explains to the school how Anthony helped him catch the toughest gang in town, making Anthony a real hero to all concerned.
Reprints
Keywords
Big City

Wildcat replaces the Atom in this issue as a JSA member without fanfare or explanation. By the next issue, Wildcat is gone and the Atom is back as if he never left.

Genre
adventure; crime
Characters
Cokey (vendor); Joe Cronias [aka "Numismatic" Joe] (villain); Pete Raskie (villain)
Synopsis
Joe Cronias has a knack of locating valuable old coins, and then stealing them without being arrested. He sees someone give street vendor Cokey a 1791 quarter for a magazine, but knows it's worth two grand at least. So Joe tries to dope Cokey, and swipe the coin, but first a school kid, noting the coin's date, asks Joe what happened in 1791 for his history test. But then says he meant he wanted to know something about 1792, since that was the year the U.S. Mint was established in Philadelphia! Joe then realizes to his horror that the coin Cokey had, dated 1791, had to be a phony!
Reprints
Keywords
Times Square

Who's Who in Zooville / comic story / 1 page (report information)

Genre
humor; superhero
Characters
Johnny Thunder; The Thunderbolt [Archibald]; Tommy O'Leary; Bad Buttes Gang
Synopsis
Johnny heads west to help Tommy O'Leary, who is afflicted with stuttering, and to enlist his assistance in battling the Bad Buttes Gang. Johnny tells him of the famous Greek orator, Demosthenes, who had the same problem as Tommy, and who filled his mouth with small pebbles and practiced speaking through them. Encouraged Tommy agrees to help brother John, who jumps on a horse and injures his lip. T-Bolt decides on his own to help, and rounds up the gang, then Johnny tells the local townspeople of the actions of Tommy, who give the reward money to Tommy so he can go to a speech therapy clinic.
Reprints

Who's Who in Zooville / comic story / 1 page (report information)

Genre
superhero
Characters
The Flash [Jay Garrick]; Billy Yancey; Bog Logan (villain); Logan's Gang (villains)
Synopsis
The Flash speeds to Hollywood, to deal with a couple of tough gangsters and a Hollywood movie studio...all with the help of young Billy Yancey, who is spastic. Billy, a budding mystery writer, is selling stories to his agent, Bog Logan, who pays a few bucks to Billy. The Flash notes a suspicious similarity between crimes and Billy's stories, and figures out that Logan is using Billy to get ideas for crimes. Billy volunteers to help the Flash, and they set a trap to capture Logan and his gang at Reality Studios. The trap works and the next day Billy is hired by the studio as a script writer.
Reprints
Keywords
Hollywood; Reality Studios

[A Place in the World, Conclusion] (Table of Contents: 19)

Genre
superhero
Characters
Justice Society of America [Hawkman [Carter Hall]; The Flash [Jay Garrick]; Dr. Mid-Nite [Dr. Charles McNider]; Wildcat [Ted Grant]; Green Lantern [Alan Scott]; Johnny Thunder]; Wonder Woman [Diana Prince] (cameo); Fred Monday; Jimmy Monday; Franklin Delano Roosevelt (cameo); Helen Keller (cameo); Beethoven (cameo); Demosthenes (cameo); Milton (cameo)
Synopsis
The scene shifts back to JSA HQ, where Fred Monday is wheeling his brother Jimmy in to see how the members did on their assignments. Jimmy has an idea for the JSA that he'd like to see implemented: a sort of code of conduct for people on how they treat returning handicapped war veterans. In fact, all handicapped people. The JSA quickly draws one up and presents it for their approval.
Reprints

Captain Tootsie and the Return of Dr. Narsty (Table of Contents: 22) (Expand) /